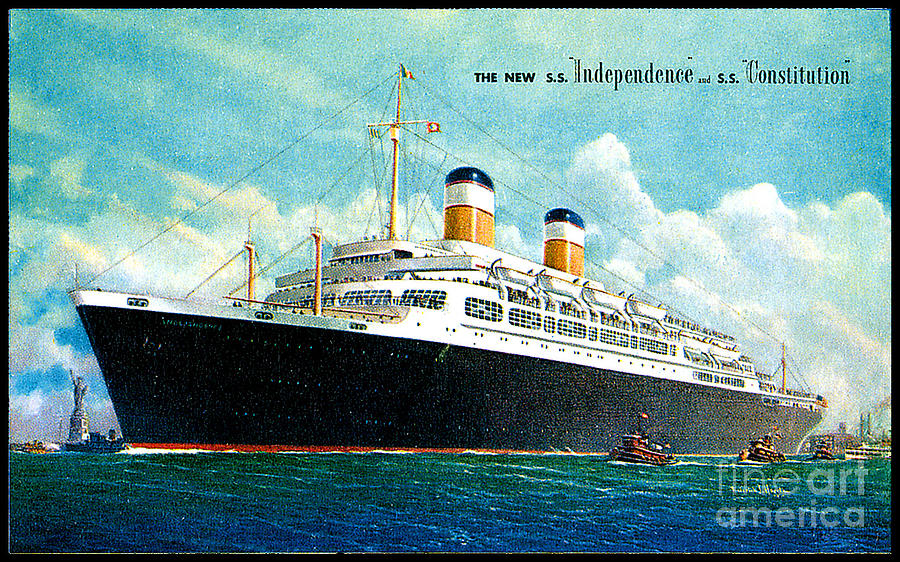 USS Independence & SS Constitution Postcard, SS Independence was an American built passenger liner, which entered service in February 1951 for American Export Lines. Originally, she plied a New York-Mediterranean route, specializing in a high-end clientele, sailing one way while her sister ship, SS Constitution, plied the route the opposite. Starting in 1980 she sailed as a cruise ship. She was shortly joined by her similarly graceful counter sterned sibling, the pair sharing the Hawaiian islands together for the better part of two decades until their retirements. Commissioned in 1951, she started her long career sailing on the New York City-Genoa-Naples-Gibraltar route to Europe. Constitution was a sister ship to the SS Independence. Following service on American Export's "Sunlane" cruise to Europe in the 1950s and 1960s the two ships sailed for American Hawaii Cruises for many years in the 1980s and 1990s; as U.S. ships with U.S. crews meeting the criteria of the Passenger Services Act they were able to cruise the Islands without sailing to a foreign port. SS Constitution was retired in 1995; while under tow to be scrapped, the liner sank 700 nautical miles (1,300 km) north of the Hawaiian Islands on November 17, 1997.