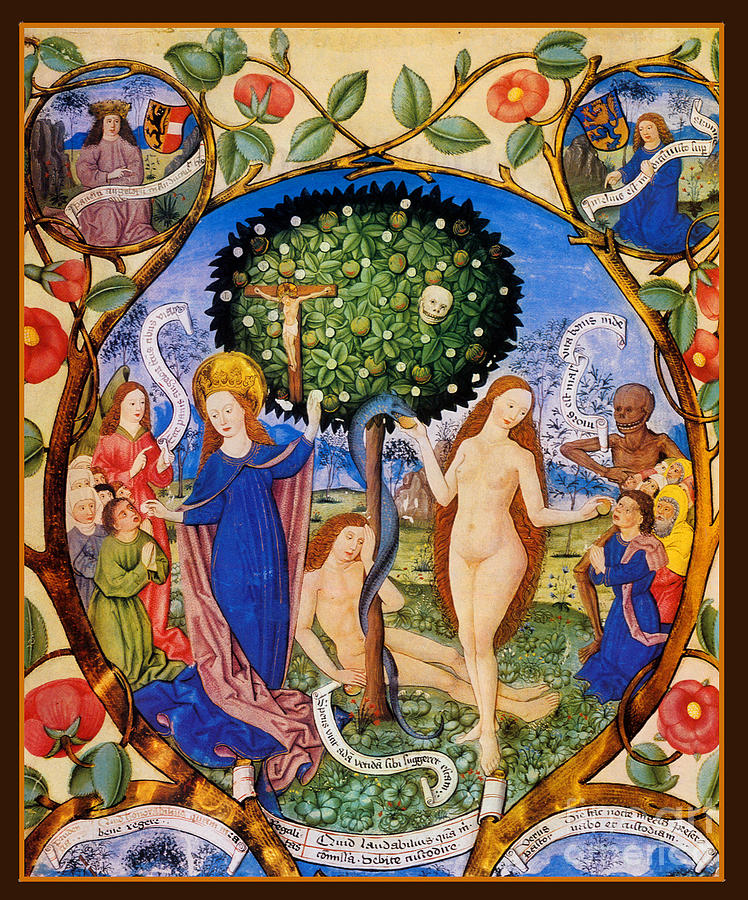 Tree of Life and Death Flanked by Eve and Mary-Ecclesia

Tree of Life and Death Flanked by Eve and Mary-Ecclesia

Tree of Life and Death Flanked by Eve and Mary-Ecclesia, This image precedes the liturgy for the feast of Corpus Christi in a missal created for the Archbishop of Salzburg. The central roundel depicts a tree that bears both fruit and sacramental hosts. It thus combines the paradisaical Tree of Life and the Tree of Knowledge from Eden. On the right is Eve, who hands a forbidden fruit to a man kneeling at her feet. A death's head appears among the fruits on her side of the tree. The tempting serpent winds around the trunk, and offers Eve another piece of fruit from its mouth. On the left side is Mary-Ecclesia. Rather than a death's head, a crucifix hangs on this side. Instead of fruit, Mary-Ecclesia administers one of the hosts to a kneeling man who opens his mouth to accept it, and she is in the process of plucking yet another wafer. She is presented as a mirror image of Eve and thus the salvific antidote to the Fall. An angel accompanies Mary-Ecclesia on the left and Death accompanies Eve on the right. Both hold banderoles bearing text. Adam reclines in a gesture of sorrow at the base of the tree and also holds a banderole. In the upper two roundels are princely figures who hold banderoles bearing the text of Psalm 77:25 on the left and Psalm 36:16 on the right. Three shepherds depicted below illustrate Thomas Aquinas's Corpus Christi sequence "Lauda ducem et pastorum," but they also embody the virtues expected of a good ruler. The one on the left is the personification of "Prudentia," the one in the center is "Regalitas," and the one on the right is "Verus Pastor." All are accompanied by banderoles.

Congratulations on your sale!!

Huge congratulations on your success and this sale!