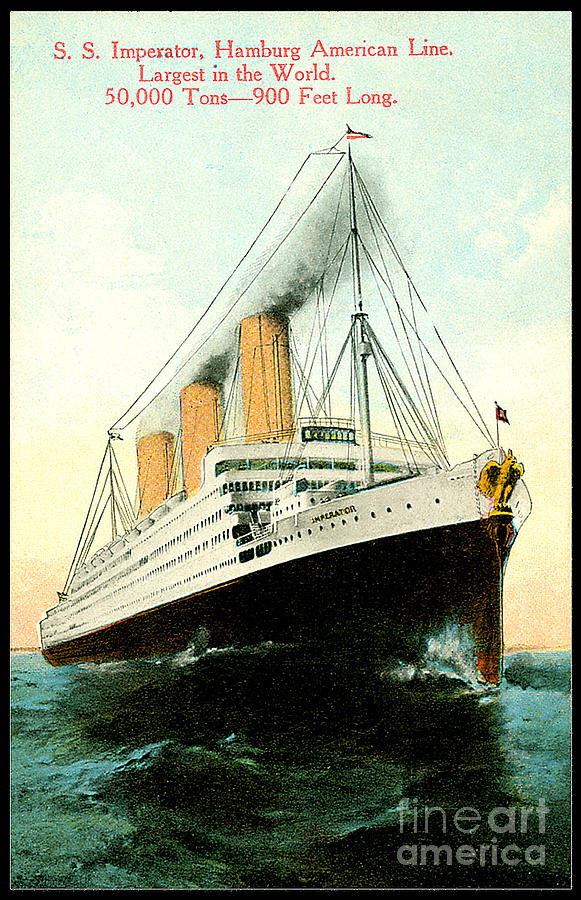 S/S Imperator, Hamburg America Line, The construction of the Imperator was begun in the summer of 1910. She was launched 2 years later in May, 1912. The ship was 919 feet long over all, 879 feet long between perpendiculars, 98 feet beam, 62 feet depth to the uppermost continuous deck, and about 100 feet depth to the boat deck. The boat deck was 100 feet from the keel, and the trucks of the masts raised to a height of 246 feet above the keel. Three funnels were each 69 feet long of oval shape, measuring 29 feet by 18 feet. She had a displacement of about 70,000 tons and a gross tonnage of about 50,000. Accommodations were provided for about 700 first class, 600 second class, 940 third class and 1,750 fourth class passengers. The crew numbered over 1,000. The appointments of the ship involved many unique features. Besides the main dining rooms there were a Ritz Carlton restaurant, a grill room, tea garden, veranda cafe, a palm garden, ball room and elaborate gymnasium and baths. The arrangement of passenger accommodations in the ship was in keeping with the modern tendency to eliminate the cramped quarters which were formerly found on shipboard. The size of staterooms and of public saloons had been increased. In the first class staterooms the old-time built-in berths were replaced by metal bedsteads, and a large number of single-berth rooms were provided. Similar arrangements had been made in the second class accommodations, and the whole arrangement strongly resembled the accommodations found in first class hotels on shore. All the rooms were provided with electric connections for lighting, heating, ventilation, call bells, etc. Supplementary to the steam heating system electric heaters were provided, and a complete artificial ventilating system was installed which provided for excellent air circulation according to the requirements of each room. Besides the large main stairways between decks, electric elevators provided communication through five decks. There were also small shops to meet the needs of the passengers.